When I told a friend that I was going to Copenhagen for a ‘birthday treat’ (a wonderful surprise from my children, made even more wonderful by the fact that they also bought return tickets too), she told me that the city was filled with beautiful people and she was largely correct. We were visiting the capital city of the world’s happiest nation.

From our arrival on Saturday morning at 10am until our departure on Sunday at 10pm, we enjoyed being guests in a welcoming, cultural city where we felt safe and unselfconscious.

On the plane from Manchester we refreshed our very basic Danish, gleaned from watching numerous Nordic Noir thrillers on BBC4 on Saturday evenings ( thank you ‘The Bridge’ and ‘Borgen’) – our ‘skills’ were not required as EVERYONE we encountered spoke beautiful, fluent English, accompanied by politeness and smiles.

Our hotel, the Scandia Plaza, was a large hotel with a prominent tower, huge public spaces, high ceilings and tall single glazed windows along corridors that you could run a three person 50m dash. ( I couldn’t help but ponder the size of their heating bills!) In its golden days Audrey Hepburn and Kirk Douglas numbered the guests; more recently I read that the 100th episode of Midsomer Murders was filmed here.

During our happy, hectic stay we travelled on public transport; by train, bus and bike – it was clean, punctual and environmentally friendly, as was most of the city, but my oh my, food and drink were expensive!

We ate delicious food on all occasions- our first lunchtime treat was a restaurant discovered while strolling the streets behind the waterside in Nyhavn. Beyond the main restaurant was a courtyard where an olive and a vine flourished in the shelter and stylish, relaxed customers smoked, drank and enjoyed the mild afternoon air. In this relaxing atmosphere and with half a bottle each of very nice Chardonnay-Sauvignon to wash down our open sandwiches, we planned the rest of our day.

A fantastic find for both atmosphere and food – oh happy start!

There was no shortage of things to see or do, even on a drizzly Sunday morning. My husband, G, and his trusty ally, Google maps, negotiated bus timetables, pin pointing exactly when the service would appear and how far we would need to walk beyond our exit in order to reach our chosen destinations.

Walking around in the cool afternoon sun I was struck by the calm manner in which couples and families moved around the streets and squares. Bikes were everywhere, and I shall return to that later. Young children were allowed to explore; though under their parent’s protective gazes, they were not prevented from tottering, climbing, feeling and tumbling in the many public spaces. Parents seemed enthusiastic in their roles – I really noticed that… there was laughter, uninhibited fun. It was striking. Is England so different that this made such an impression on me?

Over the weekend we walked over 40,000 steps – I know this because have a near obsessive need to gather such data on my Garmin watch. Walking means hunger and hunger leads often to chocolate…. and we found some very expensive but (and I have only sampled two so far) divine chocolates before heading back to the hotel for a snooze in the enormous comfy bed.

Revived and ready for a night in Copenhagen, we confidently made our way by bus and foot to the Degas Brasserie (www.degasbrasserie.dk). 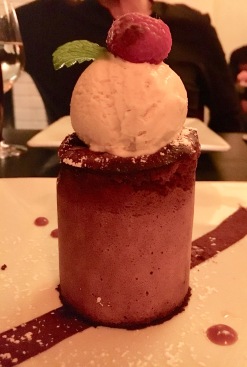 The service was outstanding- how our waiter found time to chat, inform and engage us as, well as the other guests, who all received the same personalised treatment, and be efficient and still keep smiling – I do not know! I had researched this restaurant before we came, using Tripadvisor, and I did well. The food was another delicious feast. I am going to try to replicate my main course at home – tagliatelle with monkfish in a lobster sauce. My creation will be a poorer relation, I’ll probably use cod and Baxter’s lobster bisque soup if they still make it – and I don’t think that anyone around my table will expect me to crown my dish with a white wine foam! Desserts were even more appealing to the eye.

I had one more treat in store on that Saturday evening – a first! After another successful negotiation of public transport we visited The Skybar at the top of the Marriott hotel. There, sitting in one of only three hanging basket seats, I swayed and sipped a glass of champagne while gazing through huge windows at sparkling nightscape of a beautiful city. I felt like the luckiest girl in the city! 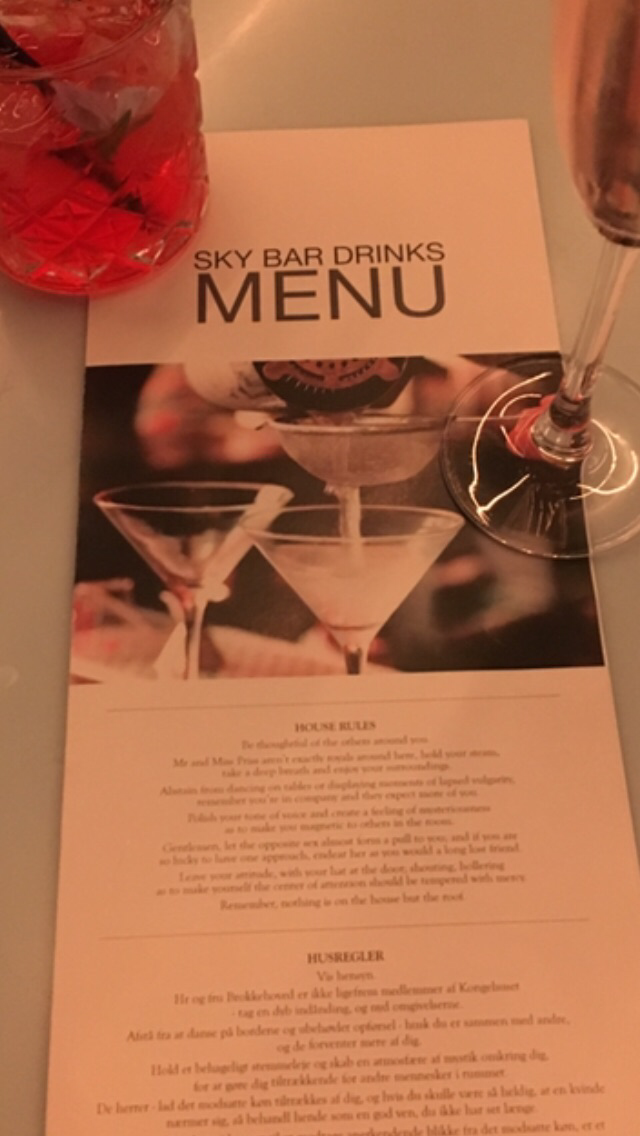 Do take time to read the ‘House Rules’ on this menu if you can!

Sunday morning drizzle didn’t damped the desire to discover more of Copenhagen. Explorer G swathed in a plastic cape, me with a kagool over my wool coat cut, a fine dash to the Christiansborg Palace where we dripped on the marble and marveled at the statues before a portrait of Queen Margrethe II. 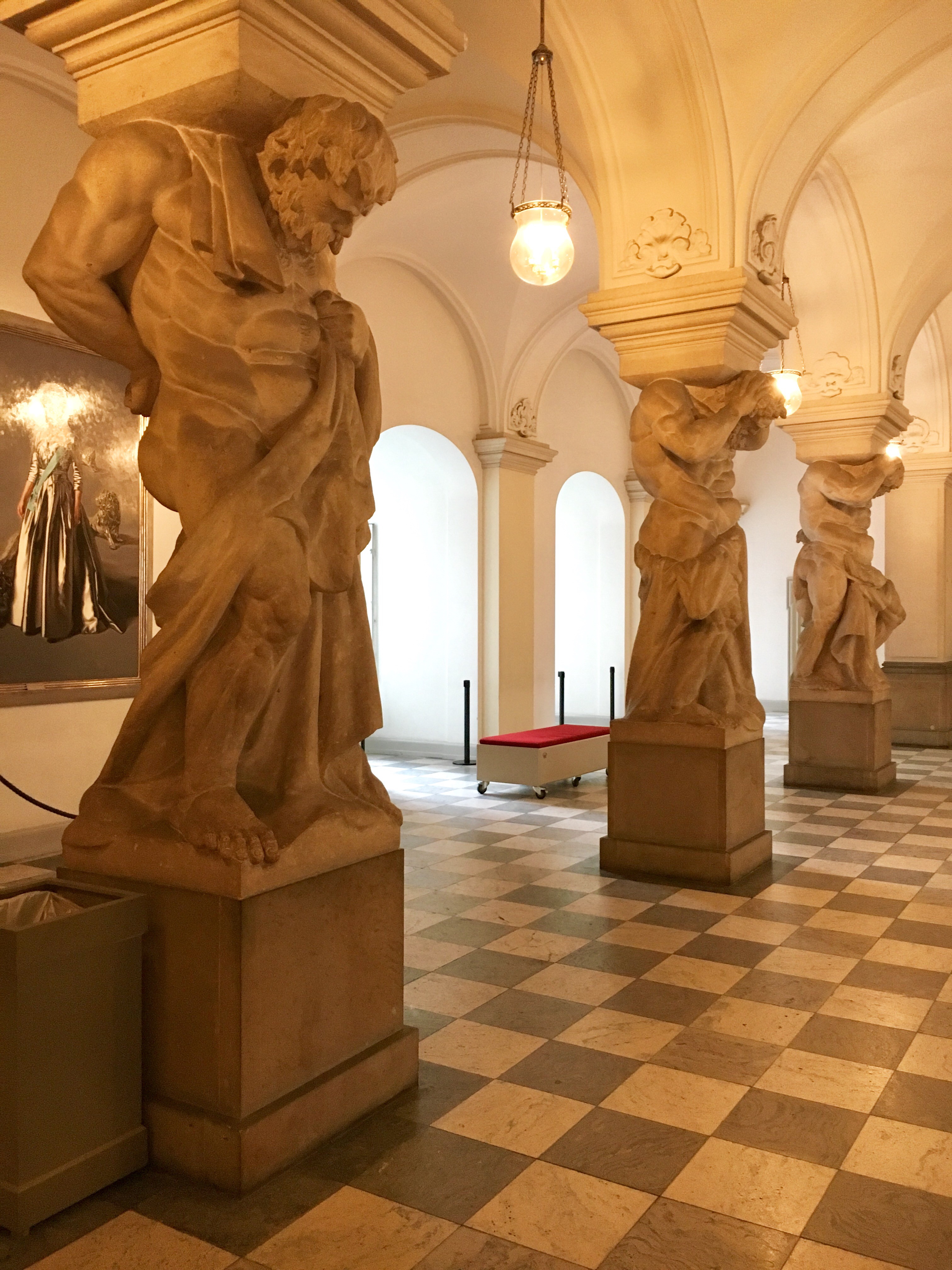 In total contrast our next destination was Christiania, an area of the city which I was curious to see. I had read that it operated as an independent hippy state, or Freetown, established in the 1970’s, it’s status confirmed as an autonomous district where about 1000 residents live in 84 acres. Meditation and yoga are popular there, which was of interest to me, as are the arts. We were warned not to take photographs, especially on the aptly named Pusher Street where drugs are openly sold. Perhaps on a sunny spring day I may have felt the vibe but on the wet first day of October the area felt like a grim hell and we quickly left what Political G commented could be also known as Corbenland!

In need of more food we caught the first bus away – back to the central shopping area, near the famous Tivoli Gardens. The gardens did not receive our attention this trip, though over 18,000 visitors on Tripadviser have given it above 4* – maybe next time Tivoli.

Another tasty but exceptionally expensive meal later and a few Kroner remaining, were wearily wandering the now dry streets, wondering whether to spend them on chocolate (always a good option I feel) when we came upon ‘Heaven Spa’ – and we entered.

I experienced another first in Copenhagen – tens and tens of little Garra Rufa or Doctor fish nibbled and tickled my freshly washed, squirming feet for 20 minutes while Relaxing G and I sat, feet in tank, viewed by several passers by. The fish were not the only ones who may have felt viewed in their tank!

Restored and revived and happy to explore further on our remarkably fresh feet, we decided that our trip to Copenhagen would not be complete without a visit to see the iconic Little Mermaid. We had been warned that she was indeed ‘little’ but I had not expected the statue that symbolises the city to be so anonymous (apart from the hoards of tourists doing battle with selfie sticks to have photos at her little webbed feet) in the industrial waters so far removed from the more cosmopolitan areas we had strolled through on our pilgrimage. Well at least it wasn’t raining and had I done enough steps to justify another dip into the chocolate box!

If you look closely at the right hand picture you will see how she looked as we approached. Looking carefully at the left hand picture and you can still spot a tourist in the shrubbery!

Adventurous G, with a deft use of his iPhone once again, connected us to a bike hire app and within 5 minutes of thinking what fun it might be to cycle back to the hotel to collect our bags, we were struggling to release a couple of hefty, white, motor enhanced city bikes.

What fun! I would never entertained the idea of riding a bike without a helmet and full Lycra, however adopting the local culture and making use of the cycle lanes (there are 390 kilometres of designated cycle lanes in Copenhagen) I weaved and squealed the 3 k behind Sporty G. 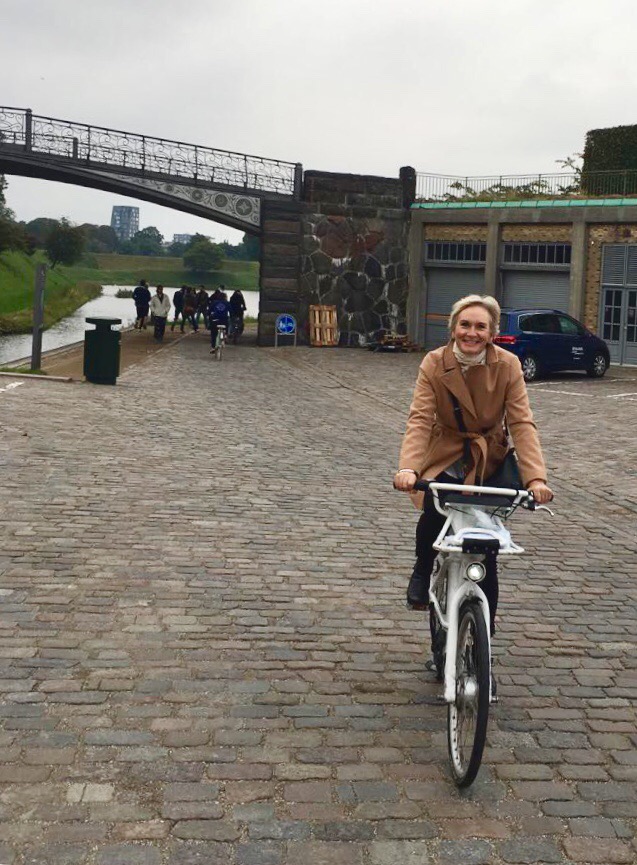 Did you know that every day 750,000 miles are cycled in Copenhagen, with 36% of all citizens commuting to work, school or university by bike? When it snows priority is given to keeping cycle lanes passable.

Bags retrieved and a hot chocolate later, we caught the train to the airport. Again I was overwhelmed by the zest for life that I witnessed in many the young and old on the immaculate public transport service.

At the airport, Tired G and I queued and waited before joining a majority of British nationals on our late running flight back to Blighty. During this incarceration we had to endure loud obscenities and cackling at high volume – the turbulence was more welcome. These people were sharing expletives that I suspect few Danish children would have had to hear in public places. The positive values I had seen personified in Copenhagen were not in evidence on our flight home – it made me feel sad.

I have since reflected on our visit to the ‘Best city for cyclists’ and ‘The world’s most livable city’ and do think that the people and infrastructure reflect positive values.

A little research  this morning has informed me that the Danes pay very high taxes, yes, but the Danish ‘solidarity system’ ensures that no one falls into economic despair. Instead of promoting a system which allows a few to have enormous wealth, they have developed a system which guarantees a strong standard of living for all. Free healthcare and education are universal. Unemployment is comfortably below 5%. If a worker loses their job unemployment insurance covers up to 90% of earnings for as long as 2 years. Workers have longer holidays – 5 weeks paid, plus 11 days holiday. The Danes are very politically and economically aware – 89% voted in a recent election. They  are involved in the shaping of their society. They seem to give as much as they take. They do not seem to be cynical.  The Organisation for Economic Cooperation and Development (OECD) found that the Danish rank among the happiest I the world among some 40 countries. I am not surprised.

I think what I noticed before my brief research, was that the people I observed valued life and each other, they were not preoccupied with what others thought, or the material things – they were just having a happy time one autumn weekend, as I suspect they do most every day.

Welcome to the home of my thoughts, hopes and inspirations. Please feel free to browse and comment. All of my posts are honest and heartfelt. I hope you feel at home here! View more posts

By continuing to use the site, you agree to the use of cookies. more information